How to Convert a Luddite

On September 27, 1825, the first public passenger steam train took its maiden voyage from Darlington to Stockton in the United Kingdom. Speeds of the Stockton & Darlington Railway ranged from 4 miles per hour to 15. On its first journey, its average speed was eight miles per hour. Though that sounds like a snail's pace now, back then it was seen as an engineering marvel. 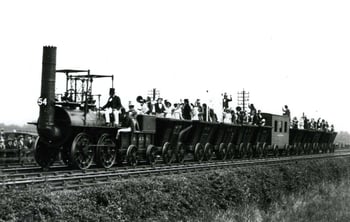 However, as the technology behind steam locomotion evolved, so did its critics. It was not a fringe theory (then) to believe that women’s uteruses would fly out if they traveled at the high rates of speed of 50 miles per hour.

The belief that women’s uteruses would fall out, limbs would rip away from the body, or that the body would just melt if humans traveled at high rates of speed (all publicized theories in the 1800s) is just absolutely ludicrous. However, humans’ fear of the unknown, which is the basis of the fear of technological advancement, is nothing new. It’s been a thing for us…well…since forever. Wireless telegraphy, the radio, television, movies and cinema, and the telephone—all had famous critics and naysayers. Even as late as 2015, an article in the New York Times claimed—with zero evidence or proof—that smartwatches caused cancer.

Don't worry. If you are hesitant about adopting new technology. You aren't alone. Research has found that about 1/3 of people have some sort of technophobia—the fear of technology.  It’s a common belief—and a cop-out—to blame this on the older generations. Because additional research done over 4 years with 16,000 participants found that “76% of people in their 50s believe it is crucial that their employer is a technology leader.” -Gerald Kane, The Technology Fallacy

So, instead of writing these people off and rolling your eyes, we need to recognize the deep-seated fear many have of technology and learn how to convince and convert those who are resistant to technological change at work.

Since you are reading this, you are probably one of the innovation drivers in your company. Either you are building your business case to present to stakeholders why you need new software, or your team is already prepping for implementing new tech. Either way, you know you’re going to face pushback and need to know the best way to deal with it.

We spoke to Brent Pilgrim, Preconstruction Director at The Beck Group about how to turn someone who is fighting change. Brent has worked closely with Beck Technology for years and before his current position, he was the DESTINI Applications Director at The Beck Group. Brent is extremely passionate about technology and is an expert at advocating innovation. Along with his experience in preconstruction and estimating software, he is one of the evangelists of the BIM Forum and BIM technology. He knows a thing or two about adopting new tech.

Brent says that firstly, it is important to recognize that generally there are two types of Luddites in a company. (A Luddite is against technology or new ways of doing things) He says there is the reluctant but willing and the unwilling.

The unwilling are a much tougher situation. Brent says, “This is the one who feels threatened by new technology or process and digs in their heels.  They are fairly adamant against change. This person is often opposed to change because they fear the loss of relevance as a professional, fear the loss of their job potentially, or they fear being left behind. We have to try, but unfortunately, many of these kinds of dark knights are predicaments without a real solution. We should approach these with empathy, but ultimately, these kinds of dark knights will likely be looking for another job soon because of the angst and disruption they will feel as a result of the change being implemented. I think by and large these types of dark knights are a few in number.”

Because the unwilling rarely ends in a positive solution for both employee and company, we are focusing on the reluctant but willing, as these folks, Brent says, “recognize that process improvement is necessary and requires trying new things from time to time.”

Brent outlines three things you need to do to bring these dark knights over to the way of the Jedi:

Brent says: The reluctant but willing are “reacting in a reasonable way and we “change agents” ought to be empathetic to their concerns, and also excited to work with these kinds of people. This person likely has experience with people selling them solutions that just didn’t live up to their hype, and as a result, there is a healthy amount of skepticism, and understandably so. Therefore, the responsibility is on us to bring the goods and not reinforce bad experiences. No matter how good our software or solution is, we need to acknowledge that we are creating disruption in someone’s production environment.”

“Trust is built by demonstrating competency with the product. You don’t have to be perfect, but you need to demonstrate that you know how it works, you’ve taken the time to understand what you are selling, and you know how to use it effectively. This is done by proper preparation work, and spending time in the product by yourself. Even better if you have experience using the product in a real-world environment. Next, build trust by demonstrating success through real experience and examples,” advises Brent.

Leave the sales pitch at the door… at this point, you aren’t having to convince anyone on the team to say “yes.” Change is inevitable, so, therefore, communicate openly and be transparent about the software and what comes next. Brent says, “If you’ve reached the point of implementation, then you’ve likely already sold the product. During the implementation, be honest about what it can and can’t do, don’t oversell features or functionality that won’t live up in a production environment. Acknowledge areas of weakness in the product during the implementation (and of course highlight product strengths!).”

You are not Alone

There are many other ways Beck Technology guides you through the implementation process when you choose DESTINI Estimator. Every client of ours is assigned an implementation specialist who designs a customized implementation plan according to your unique needs and specifications. Further, we will guide you through appointing what our client Gilbane calls “The Oiler”, how to launch a pilot project, and help you develop a training schedule.

From starting your search for new estimating software to completing a successful implementation, we have plenty of guides that tell you how to navigate buying new software. Check out the following 8 blog posts about how to mitigate change when adopting new tech.