Preconstruction has had a reputation for being a little disconnected—whether it’s in the form of tools that don’t speak to each other or a lack of standardized training for new estimators. And maybe that was true even five years ago, but today—thanks in large part to technological advancements in construction estimating software—it doesn’t really ring true. 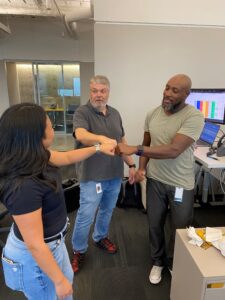 Estimating is a team sport!

Today, preconstruction is probably more connected than it ever has been. There are conferences, workshops, podcasts, how-to videos, organizations, and even some influencers. But perhaps one of the most important initiatives to emerge from this renaissance is the renewed focus on mentoring.  We all know the value of a mentor, no matter where we’ve come from. Mentors are crucial at every stage of life, from figuring out how to go from college to a corporate career to navigating the waters of moving from a junior to senior position.

Don’t just take our word for it, though. Mentorship isn’t a vague, feel-good trend—it’s something that has real heft to it. One study found that those with mentors (also known as mentees) are promoted five times as often than those without. Another discovered that mentor programs help increase employee retention for both the mentor and mentee by about 20%. And participating in these kinds of programs also significantly boosts employees’ overall satisfaction. This is also a net win for employers, who benefit by developing senior talent in-house—a huge need in preconstruction especially, as many senior estimators are hitting retirement age, often without anyone to replace them.

But what does mentorship look like on a practical level? Does it always have to involve elaborate, drawn-out, voluntary or voluntold programs? Not necessarily. Here’s a few different ways you can begin to tackle mentorship within your preconstruction department.

One of the biggest but most attainable steps you can take to foster space for natural mentorship is creating, and upholding, specific standards around your estimating process. This is particularly crucial for big companies with teams spread across multiple offices—it’s difficult to make connections with more experienced colleagues if you guys don’t even work in the same estimating “language.”

Our clients at Balfour Beatty found that exchanging valuable information and tips throughout their various locations was much easier when they moved to a more standardized mode of operation for their preconstruction teams. Landon McQuestion, Director of Preconstruction and Estimating at Balfour Beatty, said, “We really wanted to have a standardized product, which also flowed into really helping our junior estimators and cementing the whole collaborative approach to estimating … What we used to run into is one senior estimator would like it done one way, another liked it done another way, and the junior estimators who were doing all the takeoff and ‘grunt work’ would have to learn it six or seven different ways based on how that person liked it done. Now, junior estimators are taught one way, and that’s how they work no matter who they’re working for.”

Partnering with other industry peers is key to starting successful mentorship initiatives.

Maybe you’ve already got universal estimating procedures down pat for your team. You’re seeing an increase of knowledge transfer and career development from senior estimators to junior estimators, but maybe you just want to take things up another level, and aren’t exactly sure where to begin. This is an ideal time to explore creating mentoring partnerships with industry peers, such as subcontractors.

This is exactly what our client, The Beck Group, has done. They recently launched a Mentor-Protégé program in their Atlanta office, with a specific focus on minority and women-owned business enterprises. This program draws from The Beck Group’s senior talent to help mentor and foster trade partners that might be overlooked or underresourced. Investing in more robust, cross-partner programs like these can help you reap the benefits of mentoring while also easing some of the load.

Encourage mentorship opportunities both within and without your company

Last but not least, you want to ensure that your estimators are hearing from a wide range of perspectives, and not just the ones they work next to five days a week. Sometimes, being able to get a third-party view on the different challenges in preconstruction can be the difference between burnout and innovation. It can even be the path into preconstruction for many. One of our DESTINI Estimator users, Johnny Rhea—Vice President of Preconstruction at Frank Dale Construction—found his way into preconstruction through making outside connections.

Not everyone knows where to go or what kind of opportunities are available to them, though. And frankly, not everyone has the time to comb through a dozen different event calendars and Google search results. So in addition to throwing up a local “relevant events happening near us” calendar in your office or Outlook, you should also make sure that your team is aware of organizations like ASPE and PCEA, as well as major industry conferences such as Advancing Preconstruction and our very own Precon World. And don’t forget that the Design-Build Institute of America has their very own DBIA Mentor database that anyone can peruse and apply for.

What can you start today?

Hopefully, some of these ideas have sparked a few of your own that you can start implementing with your team now. In the meantime, tell us in the comments which form of mentoring you’d be most excited to onboard to your estimators today. And, if you’d like to take it a step further and check the first idea off your list, schedule a demo of DESTINI Estimator here.

Tips, Tricks, and How-To How to Have a Smooth Software Transition …a guide for users and those who manage them.
Read more
DESTINI Estimator How to Get the Most Out of DESTINI Estimator In January 2022, Beck Technology created a new department called Customer Success to further our commitment to revolutionizing the industry and …
Read more
Estimating and Preconstruction Reigniting Your Passion for Work Beck Technology wouldn’t be here if it weren’t for our passion for construction, technology, and creating the future. You wouldn’t be where you are …
Read more